I didn’t post an update last week, due to a rather difficult week, mostly with, ahem, a certain seven year old. But then I opened the front door, and saw the following, which I found rather amusing, and perfect for one’s blog, in which everything looks so delightful all the time

Yes, they were reading to Sulien, AND not fighting over who reads which page, sits to the east or west of him, or the correct pronunciation of “interesting”.

We visited the Agricultural Heritage Center, which is free and a lovely way to spend the afternoon. E and G brought home the Nature Detectives paper for that site, as part of their quest to visit all the open space sites in that program. After a visit at Carrie’s Honey (recommended!), we came home for an always too-brief visit from my aunt and uncle on one of their cross-country trips. Ruthie suggested a post on how to make yogurt, so here you go!

Yogurt
milk (I use very rich, raw milk, but pasteurized will work)
plain yogurt (with active cultures, which most yogurt has): 1/2 to 1 t. for each cup of milk
jars (I like 2 cup, wide-mouth glass jars)
a cooler large enough to fit the jars

Heat the milk to about 180 F (almost boiling), whisking frequently to avoid scorching the bottom. This changes the protein in the milk so that you don’t get goopy yogurt. Cool it down to about 110 F (cool enough that you can put your finger in it without burning it, but so that it is still a little warmer than you are). Add it to jars with about 1 t of yogurt for each 2 c of milk. Put the lids on, give it a little shake to distribute the yogurt, and set in a cooler of hot water (I use the hottest tap water from my sink). After several hours (usually 6-8) the yogurt will be set and ready to refrigerate and eat.

Much like the above-mentioned soap, this is a natural product, so quirky things can happen. Sometimes it isn’t set enough after 8 or even 10 hours. I usually replace the hot water, and sometimes add a little more yogurt, and give it several more hours. If you get a thinner consistency than you like, either embrace it, or add a thickener like powdered milk, or strain it (but use the whey-like part!)

Resist the temptation to use lots of yogurt. For some reason, more bacteria doesn’t equal better yogurt, and will actually make a worse product. The other quirk of yogurt making is to leave the yogurt still while it is setting, or it will not set as firmly. Ask the bacteria why; i have no idea.

You can use a previous batch to start a new one, but I have read that after time, it will not work well anymore. I like to switch up the bacteria, to make sure our systems are getting a good variety, so I usually use store-bought yogurt as a starter. Experiment with different brands; I love Straus yogurt, and the final product usually resembles the type you used.

And some photos from the week, in which we had rain(!) and continued to appreciate this never-ending autumn: 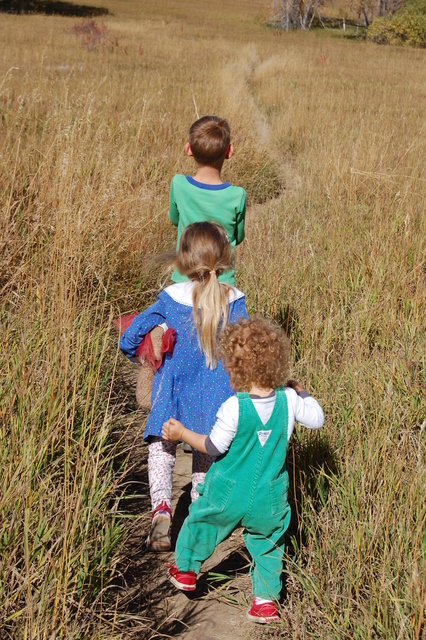 This is our Saturday breakfast, and is evolving a bit week to week, but the current version is so good.

Soak the oats, yogurt, water, and nuts overnight. Mix in the rest of the ingredients except apples. Butter an 8″ square pan and layer the apples in, then pour the rest on top. Bake at 425F for about 45 minutes, or until it is set. Let it cool a bit. Serves 4-6

The soaking helps break up enzyme inhibitors, making the grains and nuts more nutritious. In a pinch, you could eliminate this step.

Make it yours! The apples are optional (or you could add a different fruit, dried or otherwise). You could switch out the grains, nuts, or spices, or eliminate the syrup and use dried fruit instead.